Julieta Vitullo is a bilingual creator, filmmaker, author, playwright and much more. An Argentine native, she came to the United States on a Fulbright. Julieta received an MA in English and a PhD in Latin American literature from Rutgers. She taught for two decades and made the award-winning documentary The Exact Shape of the Islands. Get to know this talented artist in our interview and then be sure to tune in on January 14 at 7pm for the Latinas Playwright Roundtable – it’s free. Register here.

Julieta, what are some of the challenges you’ve encountered artistically and how do these challenges affect your ongoing work? What are you working on now?

The biggest challenge in my craft has been shifting my writing from my native Spanish to English so that I can reach a wider audience where I live–not just because English isn’t my native language but because my characters tend to be Spanish speakers and the stories I want to write don’t always take place in the U.S. This has required a lot of problem solving in terms of plot. In finding ways to justify the use of English by these characters, I’ve come to incorporate this “problem” into the stories I write, turning it into an asset.

Sometimes using English is inevitable, like if you want to put on a Chekhov play or any work in translation. But I’m never quite convinced when characters from other linguistic backgrounds speak English to satisfy the demands of a market–this happens a lot in films and directors sometimes choose to have actors speak English “with an accent,” as if everyone in the world spoke English with a different flavor. But, personally, I can’t have two characters whose main language is Spanish speak in English just to fulfill a communication need. There has to be a better reason that explains why they chose English. Did they live part of their lives in the U.S.? Did they learn English from someone in their family? Do they live within two cultures?

I just finished a play commissioned by Mirror Stage about the topic of climate change. I encountered that “problem” again and decided that while half of the characters are Latin American, they were going to speak English so that one of the characters, an unexpected visitor who only speaks English, could understand. (Watch for a reading of that play, Keepers of the River, in April!) I’ve been trying to write a play where the main character goes back to the house where she spent the first few years of her life in her native Buenos Aires. She left the country when she was five and never spoke Spanish since. But the characters she encounters there are Argentine. How do I have them speak without leaving my mostly-English speaking audience out? Do I let them speak some English for the sake of the main character? But what about when she isn’t around? How much Spanish is too much? It’s driving me mad. But for me, finding that justification and that balance is a political statement.

Who are some of the playwrights, filmmakers, artists and authors, past or present you follow and/or which artists have been the most influential for you?

A few theatre productions of the last couple of years before Covid that moved me and impacted me: Lauren Gunderson’s I and You, directed by Agastya Kohli; Hansol Jung’s No More Sad Things,directed by Wesley Frugé; Quiara Alegría Hudes’ The Happiest Song Plays Last, directed by Julie Beckman; Steven Dietz’s Last of the Boys, directed by Braden Abraham; Yussef El Guindi’s Language Rooms, directed by Brendan Healy; Maiden Voyage, written and directed by Rebecca Tourino Collinsworth, and so many other plays by my colleagues at Parley. 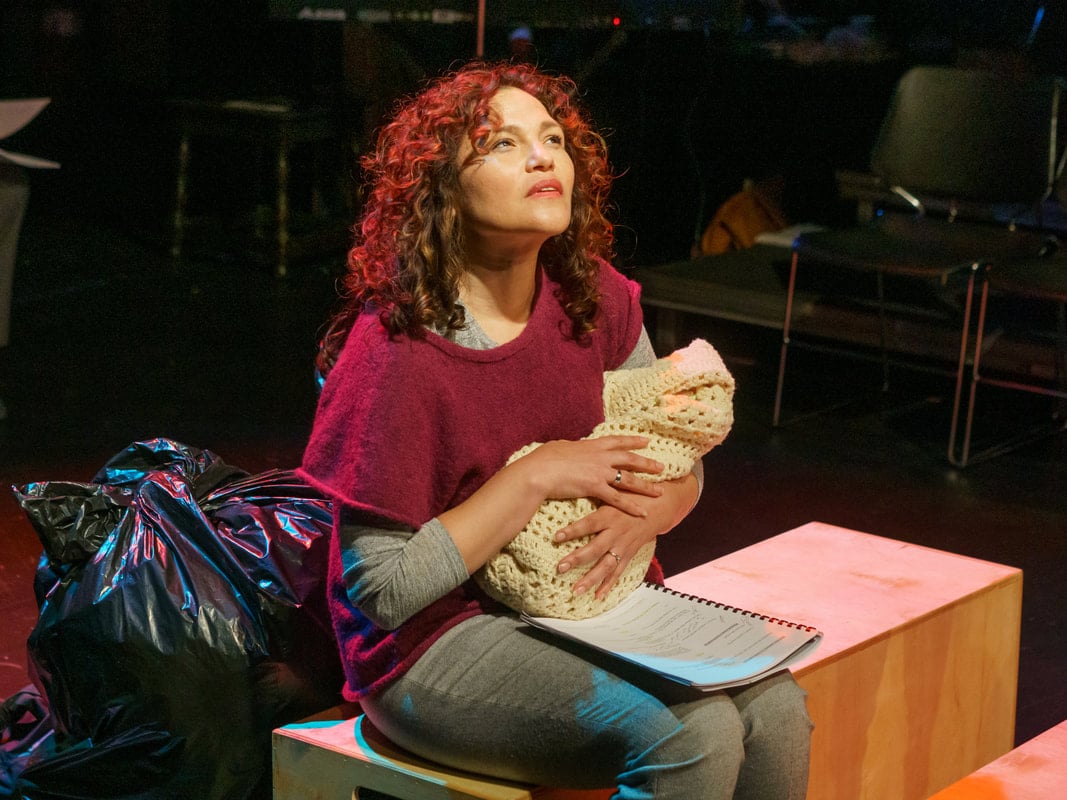 In films, Emir Kusturica’s early 80s and 90s films; Krzysztof Kieślowski’s color trilogy; Werner Herzog; pretty much all of Pedro Almodóvar’s work; the documentaries of Agnès Varda; the first part of Back to the Future, which has such an impeccable plot and is such a pleasure to watch (Although I should say it bothers me that it portrays Lybians as terrorists. Even as a child when I first watched it, it puzzled me that the really bad guys had to be from some other country, like they didn’t have their own bad guys to depict. It’s too bad that for so long I had to have a bad association with a country I knew nothing about, just because of a movie).

In literature, the short stories of Jorge Luis Borges and Julio Cortázar; García Márquez’s One Hundred Years of Solitude; Juan José Saer; Manuel Puig; José Saramago. To name authors that are still with us, anything written by Alice Munro; most of Anne Patchett and Elizabeth Strout’s work… Deesha Philyaw’s short story collection The Secret Lives of Church Ladies, to name something I just finished and loved. A large portion of what I read until my thirties was written by men. I haven’t made a conscious decision about this, but now it seems that I read mostly women.

I don’t necessarily think these influences appear explicitly in my work, but anything that impacts me emotionally and intellectually as a reader or audience member, will somehow make its way into my own work.

Can you tell us about Parley and your involvement in eSe Teatro? Why are these artistic organizations important?

I joined Parley in 2017 after taking playwriting classes with Elizabeth Heffron at Freehold, and with Rebecca at her home studio. Those classes were my first introduction to playwriting, and taught me a lot about structure, language and characters, and how to begin to even think about writing my first play. Since joining Parley, I’ve written five full lengths and several shorts, and I’ve witnessed the birth of dozens of new plays by my colleagues. We meet weekly and share each other’s work. We give each other feedback and talk about our craft for two hours every Tuesday night. It’s one of the most important things in my life, which has allowed me to stay sane, focused and motivated these last 10 months of isolation and insanity. We’ve also been learning how to write video plays, which has been a very valuable experience with a steep learning curve. Back in the day when we could gather, Rebecca directed each of the plays from our group in the form of workshop productions–she’s helped bring to life more than fifty of these plays. Each of those nights was a big celebration of individual artistry and group collaboration. I miss that so much. 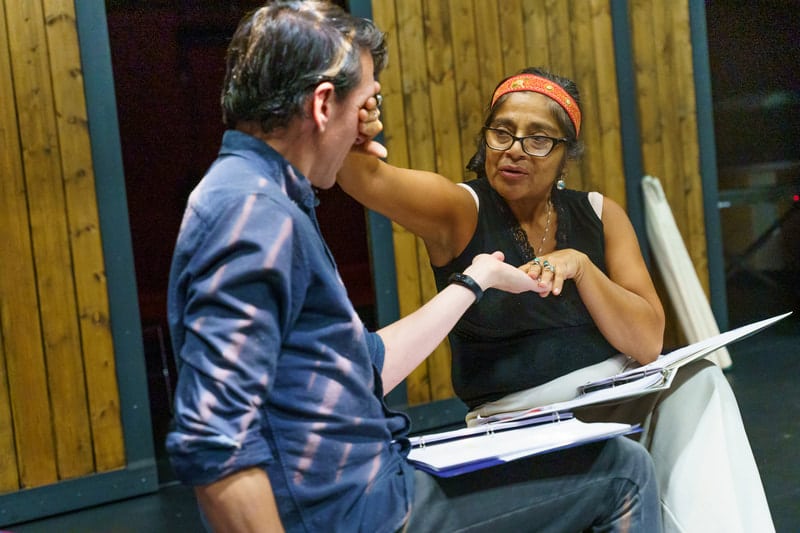 I joined eSe also in 2017 and had the privilege of working as a dramaturg for César de María’s Journey of the Saint with Rose Cano as director and Meg Savlov as musical director. Their work, individually, is powerful, and the two together are a tour de force. I was still pretty new at this theatre thing (I still am!), and working with them and the cast and crew was such a pivotal experience for me as a theatre artist. Since then, we collaborated with Rose, Meg, and the rest of our group on several readings and workshops, including a workshop production of Two Big Black Bags in 2019, in which everyone from eSe participated in some way, and which has been the biggest collaboration between eSe and Parley to date. There are seven of us Latinas committed to making theatre in Seattle and featuring the work of Latinx artists. Each of us has her own life experiences and expertise as performers, writers, directors, musicians, teachers, stage managers, administrators. This past year we had a series of virtual readings of María Irene Fornés’ Mud/Barro for women connected to Casa Latina, and a reading of Marisela Treviño Orta’s Shoe. Shoe is a beautiful play and so fitting to the times we live in because, for me, it’s about daring to expand your world beyond the constraints of the material reality around you. In addition to that, we’ve been working on organizational things such as bookkeeping, or building a new website, all of which is amazing considering we live in one of the most challenging eras of our lifetimes. While we’ve been meeting regularly during Covid and our organization is thriving, our staff meetings always used to involve food and sometimes drinks, and we can’t share that anymore. The screen doesn’t do it. So I miss our in-person time.

What brings you great joy?

Watching my kids sleep. Hot sand at the beach. Snow on or around Christmas. When the lights go out in a black box theatre the moment before the show starts.

And… wine or chocolate?

Get to know Julieta, Marisela, Rebecca and Rose on January 14 in the Latinas Playwright Roundtable.

Discover more about Julieta on her website. Photos used in this article by Mark Gladding.