ACT is a contemporary theatre where artistic ambition and civic engagement unite.

ACT envisions a world where the power of theatre expands our collective understanding of community and our own humanity.

A Contemporary Theatre – ACT was founded in the summer of 1965 by Gregory A. Falls (1922-1997), head of the University of Washington’s theater department at the time. The theatre thrived in a former community hall at the base of Queen Anne Hill until 1996 when they moved into their new home, the historic Eagles Auditorium in downtown Seattle. The Eagles Auditorium Building is an eight-story historic theatre and apartment building built in 1924-25. Designed by noted local architect Henry Bittman, it was erected by the Fraternal Order of Eagles, Seattle Aerie No. 1 in 1924-25. Since its construction, the Eagles Temple was in continuous use as the lodge for F.O.E. Aerie No. 1 until August, 1981. The building also has a national history for those who have spoken or held concerts at this location. The Eagles Auditorium is where Dr. Martin Luther King, Jr. spoke at his one and only visit to Seattle on November 10, 1961. The building served as a major rock concert venue from the mid-1960s until 1970. Some of the legendary rock bands that utilized the venue included The Grateful Dead, The Doors, Chicago, Richard Berry, Pink Floyd, Duran Duran, and more. For ACT, the building provides five performance spaces, supporting our mission to nurture new and seasoned artists and connecting audiences to many stages of the creative process.

Click below to learn more about ACT’s MainStage, ACTLab, Young Playwrights Program, our Core Company which fulfill our mission and support these our initiatives to engage audiences, develop new works, and keep the art accessible.

There are over 300 plays in our rich Mainstage history including 49 World Premieres. Our Mainstage selections epitomize ACT’s reputation for presenting innovative, challenging, entertaining and relevant work. We are a contemporary theatre because of our contributions to new works and because of the relevant, contemporary themes we explore in classic material. Our 2017 Season premiered Moby Pomerance’s play Alex & Aris, a play that was commissioned by ACT, developed, workshopped and then produced. Likewise, King of the Yees by Lauren Yee, began in the ACTLab in 2015, went on to a World Premiere at the Goodman Theatre and returned to ACT for our 2017 Season.

ACTLab is a curated partnership program that fills our venue with innovative theatrical experiences. By forming financial and artistic partnerships, ACTLab serves as an incubator for individual artists and theatre companies to experiment, grow and reach new audiences, cultivating ideas and experimentation in a collaborate environment.

As a result of the ongoing pandemic, this program has been suspended. ACT continues to investigate and consider ways to authentically partner with producing companies across the region. If you have any specific questions, please contact artistic@dev.acttheatre.org.

YPP started in 2002 and upgraded the curriculum to meet state learning standards in 2015. The YPP is an integrated 10-week, 20 class program that serves 6th through 12th grade students in both public and private schools in the Puget Sound area. Our program embeds teaching artists in school classrooms teaching the art of play writing. YPP builds confidence which, research suggests, positively impacts other areas of learning. Every student writes a play. Many of the plays are read at school events including evening programs and school day assemblies. Eight plays are selected for ACT’s Young Playwrights Festival produced in March and as many as ten additional plays are selected for production at our partner theatres.

Due to the pandemic, the YPP program has been suspended. ACT is committed to the arts in education and is re-evaluating how to make the greatest impact. Please check back with us. If you have any specific questions, please contact artistic@dev.acttheatre.org.

The Core Company is a group of artistic collaborators who support the mission of building community at ACT. The Core Company’s original purpose was to encourage an environment of artistic excellence, while creating a home for local artists to experiment and grow. In 2020, the Core Company redefined itself as an integral part of the reimagining of ACT Theatre’s ethical mission. Members serve as an artistic advisory council that helps to guide ACT on its path to making meaningful, contemporary art.

A Christmas Carol: In 1976, ACT inaugurated an annual Seattle holiday tradition with Gregory Falls’s own adaptation of the classic script by Charles Dickens and has continued every holiday season since. This classic favorite has become a holiday tradition for many in Seattle. 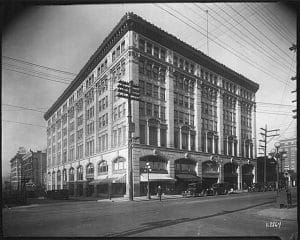