Skip to content
Home/Uncategorized/Keiko Green: More Than Meets the Eye
Previous Next

You’ve seen Keiko Green, the actor on the Seattle stage for years. ACT regulars remember her in such roles as Mash in Stupid Fucking Bird and Emilie in Dangerous Liaisons. Yet it was Green’s writing that captured the eye of Artistic Director John Langs this time. And it is these words that will soon be powering a new production on the ACT (virtual) stage during the 2021 Digital Series as the world premiere of her play Wad makes its way into people’s homes across America.

Green was generous enough to sit down with me on a lovely San Diego afternoon to talk about everything from this production, the play itself, and the person behind the script to her professional pivot and Zoom trivia (yeah, that’s a thing).

In an effort to shed some light on her work as a writer and her decision to leave the Seattle area to pursue an MFA from the University of California, San Diego, I asked Green what she would want the ACT community to know about this shift. “Writing is not a hobby of mine; it is something I am taking really, really seriously,” she replied. And if the highly selective admission process at UCSD doesn’t support that fact (there are only four total students in the MFA program for playwriting), the passionate way in which she spoke about writing certainly does. 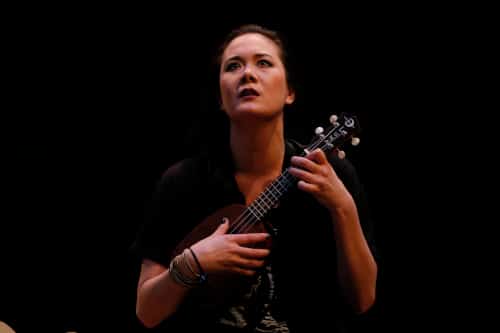 “This is a step I have taken for myself and my career that is focusing on world-creating,” she said. “If I can write stories — plays, movies, TV shows — for the rest of my life, that would be my ultimate dream. It’s the writing … that feels like me sharing my heart with the world.”

I am really obsessed with the true-crime genre, but I was listening to a podcast about the Golden State Killer, and they really focused on the victim in ways that true crime doesn’t. There is something really interesting about the ways we romanticize these killers.” Green then wondered, “What is it about us, especially women, that draws us to that kind of gruesomeness and these stories of violence? There is something in there that is deeply psychological that I wanted to investigate — mostly in myself.”

What sort of research did Keiko do in order to create the world that is Wad? There were two main focuses: the death penalty as a whole, and the prison pen-pal system. Both of these show up as essential elements and issues in the play. “This piece is not a pro– or anti–death penalty play at all, but I hope it does bring up some questions, not just about if someone is guilty or not, but assuming that part of the justice system is working, is it right to punish someone that way — 30 or more years later?”

The concept of time inside and outside of prison stood out. Imagine being in prison and getting letters from a pen-pal for four or five months straight, and then… they just stop. This reality is something Green felt compelled to incorporate into Wad.

I had the privilege of interviewing Wad’s director, Ameenah Kaplan, just a few days earlier, so I asked Green about Kaplan’s belief that the play isn’t sad so much as it is dark. She agreed with Ameenah, explaining, “There is a lot of darkness to this play, but I think that the darkness in the play comes from a young woman who is probably a little too immature to really grasp the situation that Jim, the other main character, finds himself in and also the situation she’s putting him in: communicating with a teenage girl. There is also darkness in the questionable sexual relationship they have; it rides a really uncomfortable line, I think.”

As for how this play came to be, Keiko explained that it actually came to her rather quickly, in roughly four months. Once she had the opening premise and the end moment, the logistics and pieces in between flowed quite easily. Sure, some scenes were cut and others added, but overall, the entire process happened readily.

Green’s biggest challenge was finding a way that let both characters be heroes on their own journey. “I wanted to let these characters be their own fully human, complicated selves, and let the audience decide from there,” Green said. “I am really not into ‘lecture-y’ theatre; I want people to have their own themes and opinions.” Green offered this concluding thought about the play, “Ultimately, the play is really about two people who shouldn’t meet, who have no reason to connect, and yet they do. It’s about the unexpected relationships and how we find connections with people we would never expect.” 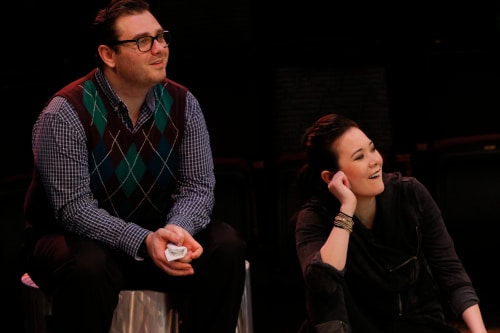 While it was clear that Green is justifiably very proud of her work with Wad, there was a tenderness that made its way into the conversation when I inquired about one of her newer roles — teacher. As part of her MFA work, she is a teaching assistant for a class on one act playwriting. “I really, really love teaching, to be frank. My students are so talented this quarter… Working with them to find the story that is uniquely them and manifest that into something that can be shared with people, is just the most wonderful thing.”

Actor, writer, teacher… and trivia host? I didn’t see that one coming, but as our conversation moved to a more casual discussion of Green’s hobbies, she told the story of how she and her husband, MJ Sieber, have been hosting Zoom trivia during the pandemic, with as many as 80 people joining in each week. With MJ, a trained videographer running it, she chuckled, “You have never seen a more professionally produced trivia game on Zoom.”

What’s next for Keiko? It’s no surprise that she has several projects in the works. In addition to the three or four plays she is currently writing, she and her husband are developing an animated series pilot episode. “It’s a scathing comedy and commentary on capitalism,” she said. In addition, there’s a horror film set in the Pacific Northwest, and even a short film about a Boy Scout troop surviving an apocalypse because — spoiler alert — they were prepared.

I know this: we will be seeing Green and her work for a long time, and if this interview serves as any indication of what’s to come, you would be wise to stay tuned.