Skip to content
Home/ACTFocus/Ameenah Kaplan: More Than Just Standing on the Edge
Previous Next

Ameenah Kaplan: More Than Just Standing on the Edge

The Orlando sun wasn’t the only bright light on this Zoom call; in fact, the sun seemed dim in comparison to Ameenah Kaplan’s vibrant passion and energy. Although she is known for her work with STOMP and Blue Man Group and as the resident director of Broadway’s The Lion King, this conversation was different. It focused on Kaplan’s visionary efforts “to make theatre inside of film” as she directs a filmed version of Wad for ACT’s 2021 Digital Season.

When asked about what drew her to this show, Kaplan quickly noted, “I really responded to [playwright Keiko Green’s] script. On the face of it, it’s just a dope script. It’s the kind of script that reaches out beyond the subscribers and brings bodies into the seats” — although, because of COVID safety protocols, those seats will be couches and recliners in living rooms across the country.

As for “making theatre inside of film,” Kaplan explained: “If we were going to do a play inside of a filmic medium, it was incredibly important to me that it actually be filmic, meaning, be visual.” 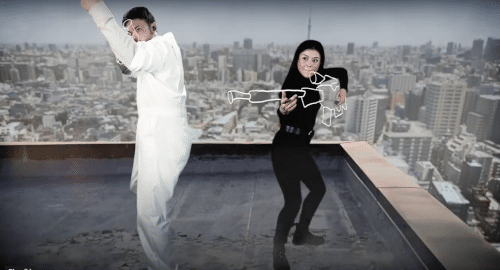 What did this mean for the creative team? Kaplan shared some of her secrets, many of them learned while working on a piece this past spring for Ohio University, where she gained experience directing during the pandemic. It was essential to her that the actors talk and hear in real time — that is, actually act — so they used in-ear microphones. To avoid the actors staring into the Zoom camera, thereby looking straight at the audience the whole time, Kaplan reverted to her film experience and had them put marks on the walls to simulate looking at someone.

Kaplan talked about one of the benefits of Wad’s script. “It takes place in two locations, so we didn’t have to travel very much,” she said. Instead, her team built a real set in each of the two actors’ houses and equipped both with a green screen. And while shooting from an iPad seemed like a good idea based on her days as a choreographer, she quickly realized that better cameras would be needed. The end result made the experience as close to theatre as possible. “We pushed the envelope; we were standing on the edge of what theatre is.”

Kaplan was quick to acknowledge that filming stage plays will be less than optimal in the future. “I don’t think film is the future of theatre. Theatre is its own thing, but this is part of keeping theatre alive, what we are doing right now.”

Wad weaves together a darkly humorous, unpredictable tale about Jim, who is on death row and his pen pal, Nyce — a senior in high school. Diving a bit deeper into her vision for directing this play, the conversation shifted to an anal- ysis of Green’s script. “I don’t necessarily think Keiko’s play is sad; I think it’s dark. But I know it is crazy-mad enter- taining.” At its core, Kaplan said, this show is about “how freakin’ lonely we all are in this world, where we are so connected, and how isolating that has been. It’s the real human stuff…down to the core of it and passion and death and sex and the lines between them.” 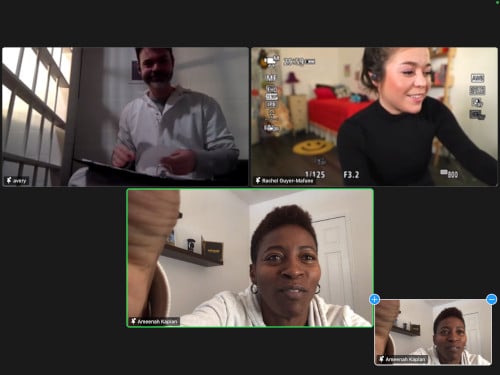 Ameenah Kaplan in production with Avery Clark and Rachel Guyer-Mafune

At this point Kaplan reminded me, “I don’t come from the ‘ivory tower’ of theatre that says, ‘If you don’t get it, then you don’t get it.’ My goal in life as a performer is to be a servant to the community; I want them to have a blast.”

Kaplan has enjoyed an impressive career, and I wanted to hear about some of her favorite moments as a performer. She became whimsically reflective, seemingly reliving the musical and theatrical magic of her past. After a bit of silent contemplation, she offered this: “There were moments when I was standing on the stage with my brothers and sisters, and we looked at each other, and it’s like, ‘We’re here; we’re doing this.’”

She added, “The Oscars were fun, because I was super young [20 at that point], and it was with STOMP. We were the Island of Misfit Toys at this super gala. But we were on that stage, and that was a dream of mine since I was a child.”

Kaplan was quick to acknowledge that filming stage plays will be less than optimal in the future. “I don’t think film is the future of theatre. Theatre is its own thing, but this is part of keeping theatre alive, what we are doing.”

Knowing that Kaplan has performed for so many different audiences and in so many different ways, I was curious what kind of performer she is at her core. Without any hesitation and with a pride-and-joy kind of smile, she proclaimed, “Dude, I’m a drummer; it’s the only thing I actually do. I cut my teeth in rock and roll and had a blast there.”

The conversation could have easily ended there, but with all the talk of the past, it seemed fitting to ask about the future, to hear what is next for her. “I think of myself as a show creator, so I want to create new shows. I want to create something that is badass and stays in the lexicon. I want to be part of that initial creative team that does some- thing new from scratch.”

One thing is clear when it comes to Ameenah Kaplan: she isn’t just standing on the edge. She is pushing that edge to unknown places — and has been her entire career.

Christopher Bronke is a passionate writer, English teacher and theatre-goer, based in Chicago. His work has been featured on a wide range of platforms including Teaching Channel, Conference on English Leadership, National Council of Teachers of English, the Bill and Melinda Gates Foundation and the Chicago Sun-Times.