In Crumbs/Migas, I’m borrowing the spine of a fairy tale that’s haunted me since I was very young,” Rebecca says. “You’ve probably heard this one: Frightened and desperately hungry, a father leads his son and daughter away from their home and abandons them. The play began coming together for me when I realized, as an adult, that this story is not uncommon. Parents are still driven to make impossible choices. Case in point: Nearly 19,000 unaccompanied children arrived at the U.S. border in the month of March. At its core, Hansel and Gretel is about poverty, abandonment, and illusion. It’s also, for me, about longing: a need to understand where we came from, what influences are shaping us, and who we can be.

In a fictional Latin American country, two hungry children are orphaned by a U.S. backed coup. Fifteen years later, they return, a modern-day Hansel and Gretel, to follow what migas they can in search of their father. Delivered through compact and electric dialogue, and leavened with compassion and even humor, Crumbs/Migas is a play about the grief and grace we encounter on the way home. 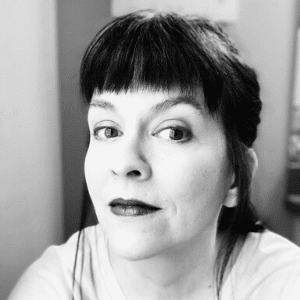 Working with ACT and Trial and Error has been like being invited into a candy house in the forest… without anyone trying to eat me up! I’ve been overwhelmed by the nourishment I’ve received at the hands of this small-but-mighty army of creative partners. It is so rare for new work to receive this kind of top tier support. I’m extremely grateful.

Crumbs/Migas is presented as part of the ACTLocal Live series of play readings. ACTLocal is committed to developing and producing new works by emerging, local artists. The program is produced in partnership with Trial and Error Productions.

Rebecca is the creator and artistic director of Parley, a playwrights’ group also located in Seattle and founder of Salvo.