Grammy Award-winning composer Adam Stern’s music should be very familiar to A Christmas Carol audiences. The beloved score, composed in 1996, is one of Stern’s favorites among the dozen-plus scores he has written for the theatre. Read on to discover more about Stern and the music of A Christmas Carol in part one of our profile.

On a gloomy autumn day in Seattle, no sun was required as Adam Stern’s passion for music shed all the light and warmth one could need as he welcomed me (virtually) into his home to discuss his 1996 score of ACT Theatre’s production of A Christmas Carol. What started off as a look into the creation of this score, blissfully turned into a journey through music and film history guided by his experience and fueled by his love for art and culture as a whole.

After a quick sound and camera check, Zoom became the conversational home for the next hour-plus, so the recording began with Stern’s passion and brilliance taking center stage. 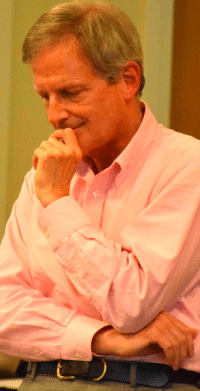 After successfully composing several theater scores for his friend and college colleague, David Schmalz, Stern moved to Seattle and found work at ACT (at its old Queen Anne location) when he was asked to create the score for a production of The Red and the Black.

Director Leslie Swackhamer came to Stern in 1996, after the successful runs of Adam’s other scores for ACT, and shared that A Christmas Carol was being revamped and a new score was needed. Stern had the opportunity to revisit his love for A Christmas Carol. “This afforded the opportunity to really channel my decades-long love of this timeless story,” Stern reflected. So, he went to work.

In the tradition of one of his composing heroes, Max Steiner, Stern went on to say, “I went to the first reading of the play, met the actors, took notes about the ranges of their voices, the way that they intoned different lines. These sketches became the genesis of the score. It came naturally to me, and I loved doing it.”  While many composers might find writing to a director’s vision restricting, Stern did not.  Recalling his collaboration with Swackhammer, he said, “When someone gives me the skeleton and I can flesh it out, I love that; it is liberating.”

What about this score makes it so timeless? It’s been used by ACT every year since 1996. “There really was a conscious effort to summon up the joys of the holiday traditions that the script itself called for,” Adam reflects. That effort was undoubtedly bolstered by the serendipitous nature of the timing of Swackhamer’s offer. “It was the first piece of music that I wrote after the birth of my second child — I was now a dad to two kids and doing the Christmas thing with them, and so the timing couldn’t have been more perfect.”

In closing the conversation about this chapter of Stern’s life and before moving into other lanes, Stern offered this, “It was a joy to compose; I had the time of my life. Bless ACT’s heart for using it every year since 1996 — it’s become part of the tradition.”

In part two of our interview, Adam discusses the process of composing his favorite compositions, movies and… plus, you’ll meet Nimble Minx, Adam’s “diva” of a cat.

ADAM STERN has been leading the Seattle Philharmonic Orchestra since 2003. During his tenure, he has brought numerous world, U.S., West Coast and Northwest premieres to the Puget Sound community. Stern’s unique programming combines beloved masterworks with must-hear rarities; his programs are not merely concerts, but true musical events. In September 2015 came word of two new appointments for Stern: Music Director of the Sammamish Symphony, and Assistant Conductor/Visiting “Pops” Conductor of the Oregon Coast Music Festival for the summer of 2016. Following Stern’s OCMF debut, he was immediately promoted to Associate Conductor and permanent “Pops” conductor of the Festival. He also served as the Associate Conductor for the Seattle Symphony from 1996 – 2001.